Why the "ABS" style of design

I have been pondering why many knives made from ABS members tend to have similar design features?  I find the knives made to be very beautiful and well proportioned, but I am wondering what design advantages they have?  I have some theories but didn't want to assume either and thought it best to ask.

The overall width of the blade is about 1.25 - 2 times wider the ricasso overall width.  Circled in the attached picture.  Is there a reason this is so common on ABS smithed knives?

The clip points are often longer than I see outside of the ABS.  I can't seem to tell if they are often left as a false edge or are sharpened.  The one pictured does not seem sharpened to me but I could be wrong.  Is this just more or less an aesthetic consideration?

"ABS" knives seem to almost always be hidden tang.  Why so few full (exposed) tang knives? I personally vastly prefer to make and the look of hidden tangs but I am curious why this is so common with ABS knives?

Very often seem to be full flat grind as best as I can tell.  Why is this the prominent grind style?

Again, all of these I have my suspicions on why but would like to hear from more experienced smiths. Good questions - for sure.

Remember that the organization was founded with the main purpose being "to preserve and promote the art of the forged blade" - or a close variation of that.

We're Americans. And we like historical knives that reflect our culture. 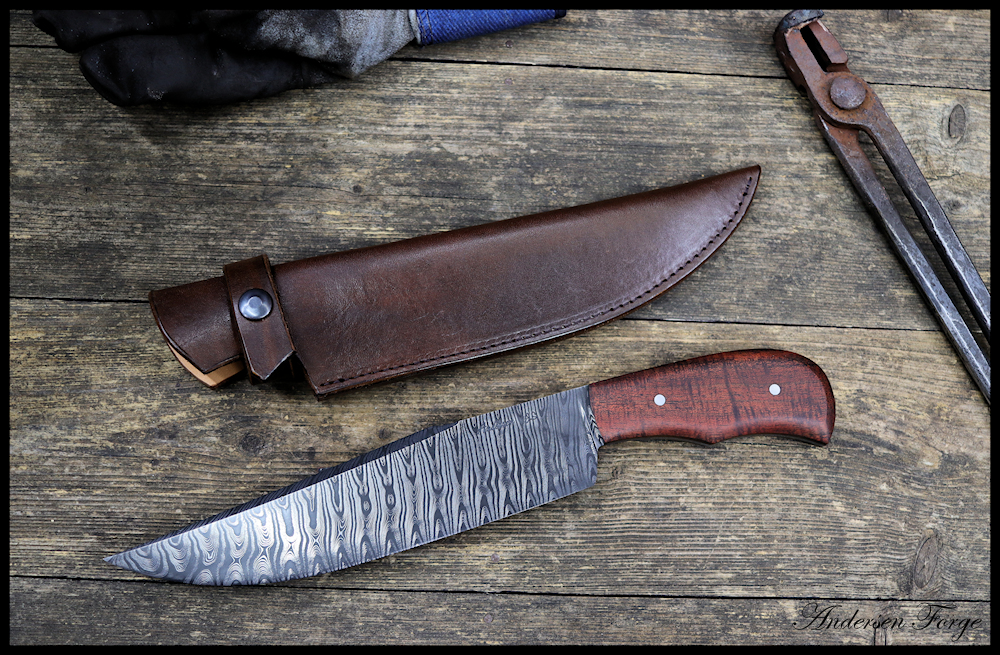 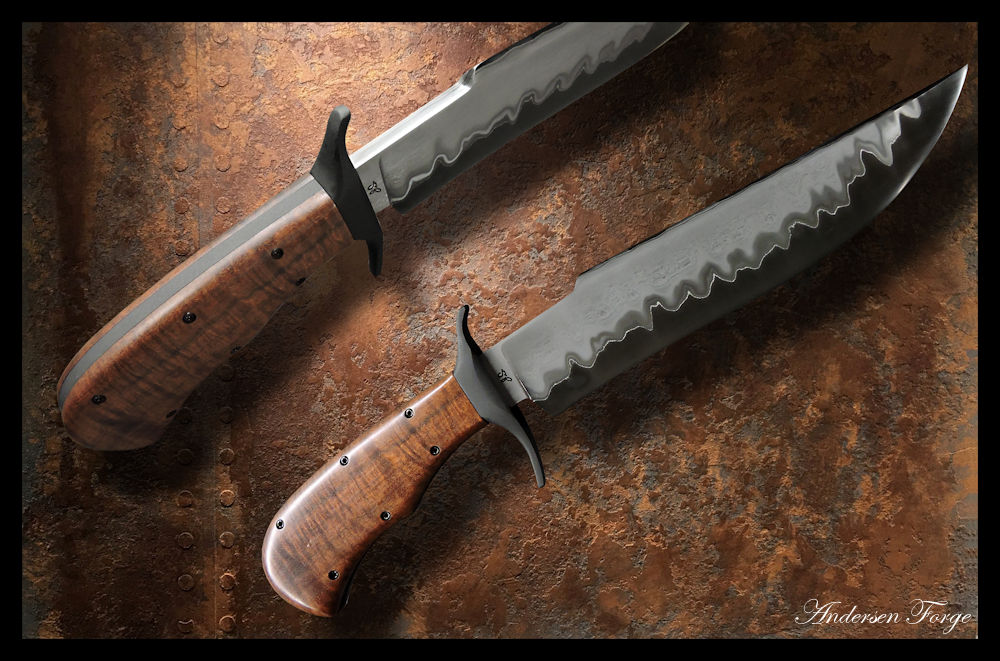 Here's a hunter with no dropped edge: 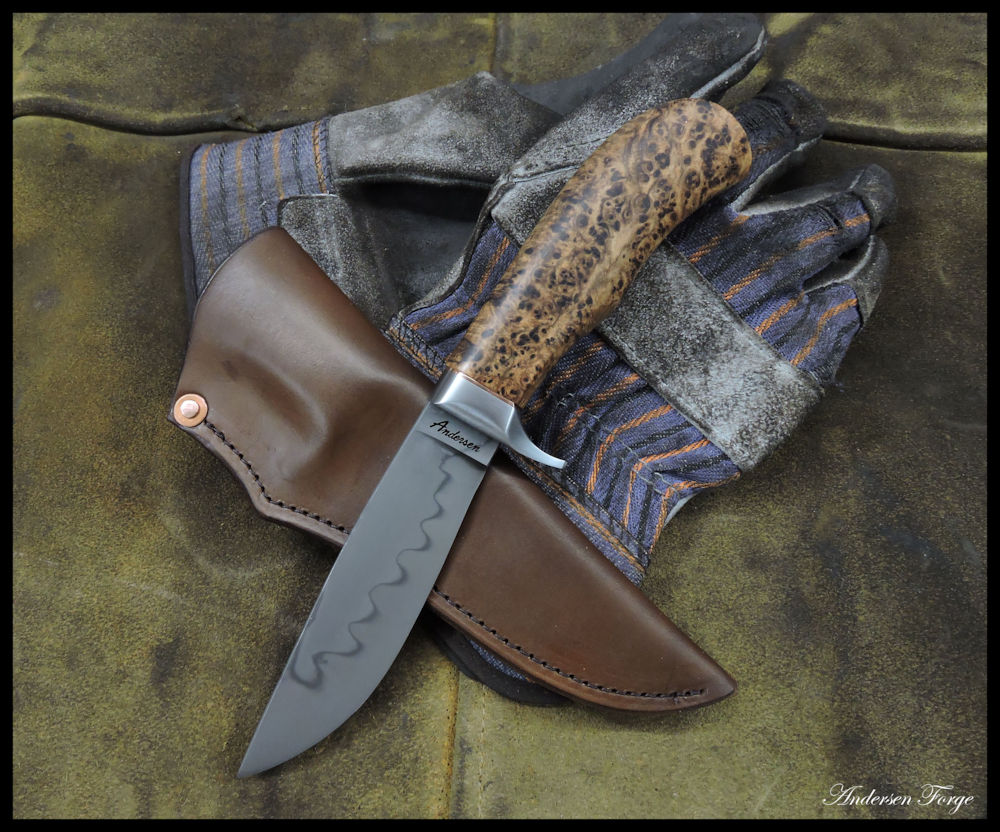 No one will kick you out for being creative! This is something I have spent a good deal of time cosidering throughout my Maker's journey. Hancock and and I also had numerous discussions about design aesthetics.

Karl makes some very good observations with regards to cultural and historical influences. So let's start with that. There are very sound reasons why these design features exist, mostly in historical origins.

Let's start with the relationship between the ricasso and the blade width.The ricasso is of French origin and came about during the 16th century in rapiers. Presumably, this brought the cutting edge out in front of the basket hilt for practical, structural, and aesthetic reasons. The ricasso didn't really exist on smaller blades until Sheffield started to incorporate them for ease of manufacturing reasons. The American makers followed suit and the presence of a ricasso on most working knives became commonplace.

So why the specific proportions? Well the most comfortable width of a handle for most people is around 3/4" to 1". The aesthetics of design require that the ricasso be centered on the handle and most likely will be the same width as the handle. If we are going to drop the choil to make shapening the entire edge possible, we need to extend that blade width far enough to make it functional, but not so far as to upset the visual balance between the two elements. So you end up with a ricasso about 1" wide, and a blade width between 1.25 and 1.5 inches.

I will address the hidden tang in a later post. I have to get to the office right now. "Why the ABS style of design"?   Frankly, because it works, in all of the ways that are important when it comes to a functional knife.

Hidden tang designs simply make the most sense for an organization that is is devoted to the preservation of the Forged Blade.  When properly created, with distal tapers, the strength to weight ratio is pretty incredible.   That same aspect lends itself to a knife being both "light" and "fast".  Distal tapers? Briefly stated... the thickest portion of the knife is in the center of the ricasso, and it tapers fore and aft from there. When viewed from the spine, the shape most resembles an elongated diamond.   This shape not only reduces weight, but also adds strength.  How?  When a lateral force is applied to a tapered blade, it creates an Arch..... where the stress is equally distributed over the entire length of the blade/arch.(the arch is also the strongest structural shape 😉)   If you were to apply the same force to a blade that is equal thickness over it's length.....the applied forces/stresses would typically find and concentrate in the weakest spot along the blade's length, and would very likely cause the blade to fail/break.

The grind...typically a flat grind, with a convex edge, is hard to beat for the majority of tasks asked of a knife. The "flat" portion of the grind removes excess weight.  The convex edge allows for far less cutting resistance then an edge created with flats/bevels.  That same convex edge is also easily manipulated to match the blade type it's applied to..... in that is can be steeper/more obtuse for heavy duty/chopping blades, and shallow/flatter, for finer cutting blades such as hunters.

Something that is not often mentioned about "ABS style knives", is their handles.  As in they are shaped to fit the human hand. How so?  Wider and taller at the rear... Narrower and shorter in the front. Close your hand around anything... it is very evident that the shorter/narrower grip is where the thumb and index finger meet, and the taller/wider is where the pinky meets the heel of the hand.  Many "custom" knives all too often have handles that are just the opposite, making them feel odd in the hand, and difficult to hold/manipulate.   Even after all my years of teaching Bladesmithing, I still am amazed at how much I have to stress proper handle shaping to students who pass through my shop, both beginners, and even advanced Bladesmiths/Knifemakers.  Finally, when it comes to handle shape, the "ABS style" handle is usually radiused along the top/spine, which further fits the human hand comfortably.

There are other, more specific aspects, that often make the "ABS Style" knife more functional, and better feeling/fitting in the hand.  I won't try to list them all, but one that bears mentioning is a "Hunter" type knife, with a guard.  In the "ABS style" the top of the guard, is typically flush with both the spine of the blade....and the top of the handle. I personally go one step further, and radius/round the blade's spine. This might seem a very minor thing, but in reality is a very significant comfort/use factor. Particularly when using the knife in a real world situation such as field dressing/cleaning big/wild game.  It provides for comfortably "choking up" on a knife for finer detail work, and can also provide an index point when you're elbow deep in a deer or elk, and don't want to get your blood mixed up with the animal's.  🙂

IMO, the "ABS Style" knives are simply the ones that I have found to be not only the most functional, and user friendly "style" of knife out there, but also some the overall most aesthetically pleasing. It's also a big part of the reason I joined the ABS, and worked my way through the ranks the MS. 😉

And finally... I started Bladesmithing/Knifemaking in what I call "The Dark Years".  A time when custom knifemaking was generally a tight lipped secret, and when information/sharing about how to go about building knives was very hard to come by. No internet, no TV shows to misguide you, and nearly nobody willing to share knowledge.    I visited the Blade Show for the first time in the mid 1980s, when it was being held in Knoxville, TN.  At that show, I met Bill Moran, who sat, talked, and answered my questions for nearly an hour!  From that moment on, I wanted to be a part of this organization, and hopefully someday achieve my ABS MS.  The first part was easy.... pay my dues and learn.  Climbing that ladder to MS was a bit more difficult, considering I was full time military, and even though that caused delays, I achieved my JS in 1994, and my MS in 2000.    And all along the way, I found the ABS full of individuals who were true to the organizations mantra.... Furthering the advancement of the Forged Blade.

The partial or stub tang is probably the oldest handle form known to humans. It certainly dates back well beyond the Iron age, and even as early as the Stone Age. Full tang knives as we know them with laminated handle scales also are very a old design, but far less commonly used in history than they are in modern times. Bronze Age weapons often were cast in clay molds and the handles were simply an extension of the body, but rarely had the laminated handles we see today. Why the partial tang design, or even the through tang design was so popular can be for a variety of reasons. Ed has nicely outlined the physics behind why this is, and why this style of handle has passed the test of time.

Thank you so much for the replies, I am grateful for the detailed responses!  Some of it confirms the suspicions I had about the "ABS" style and certainly goes well beyond what I initially thought.