Biographical Info Thanks for visiting my ABS page. My knife making journey began in 1988 when I was required to teach a craft to young boys and men from our local scouting group, The Royal Rangers. As a Royal Ranger leader, I could also join the Frontier Camping Fellowship (FCF) and wear buckskins, carry and shoot black powder rifles and throw knives and tomahawks. It was great fun and I have wonderful memories of Pow Wow, camping, hiking and other adventures  we had in that group of great God fearing men and boys. My first knives were of the primitive styling and looked right at home with my leather pants and coon skin cap. It became quickly apparent that they needed more than good looks.  They didn’t perform well even with the simplest of camping chores. I needed to learn how to make a blade that was tough and held a good edge in order to teach the craft. I joined the ABS and began forging high carbon steel in a coal forge. The next year I built a propane forge from Ed Caffrey’s plans and put a huge fan on it. I could melt cast iron with that forge. Unfortunately it would burn the carbon out of every blade I put in there. Finally I bought a Mankel 3 burner forge like Ed Fowler uses. My blades began to improve dramatically with the better control of heat. The addition of a pyrometer and thermocouple was a good decision. Under the tutelage of Wayne Goddard I was eventually able to pass the performance test and judging for Journeyman Smith in 2000. Ed Caffrey and Audra Draper helped tremendously via phone conversations and emails so I could go on to pass my Master Smith testing and judging in 2003. I have been a full time maker since 1998. My interest in black powder pistols and knife combinations began during the Blade Show in 2000 when I saw the large bowie knife and flintlock pistol mounted on the side of the blade that Wade Colter had made for display. It was a thing of beauty and artistry. I began to look in knife and gun history books and discovered that craftsmen made these “dual threat” types of weapons as soon as gun powder was invented. In those days firearms and gun powder were so unreliable that they used the blade as a backup….or maybe it was the other way around? Anyway I fell in love with the knife and gun combinations and by the time my Master Smith judging came I had “Love and War” a 22 caliber black powder pocket pistol and folding Damascus blade combination finished and tried to enter it as one of my 5 knives to be judged. Jerry Fisk was very hesitant to accept it and talked to the other member of the board as to whether it should be allowed. Their final decision was if I only had 5 pieces to submit they would include the pistol/folder. I had a spare knife just in case and ended up submitting that one in its place. I will never know if I could have passed with the pistol/folder in the judging. As a Master Smith knife maker I enjoy making a wide variety of knives. I have never really settled on any one style or design as my favorite. The black powder bug is always there though. I marvel at the “Makers of Old” with their artistry and no limits of imagination. They were such fine craftsmen and had lifelong dedication to their art. The intricate details and complexity of their guns, knives and swords are nothing short of miraculous achievements to me especially considering they didn’t even have electricity. Thanks again for stopping on my page. Please contact me if you have any questions or comments about my work or a possible future project.   Best Regards, Bruce D Bump 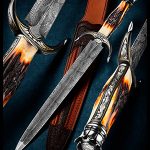 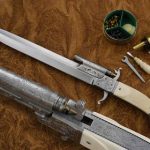 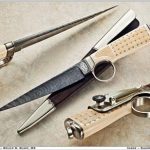 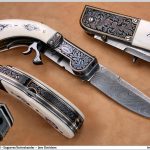