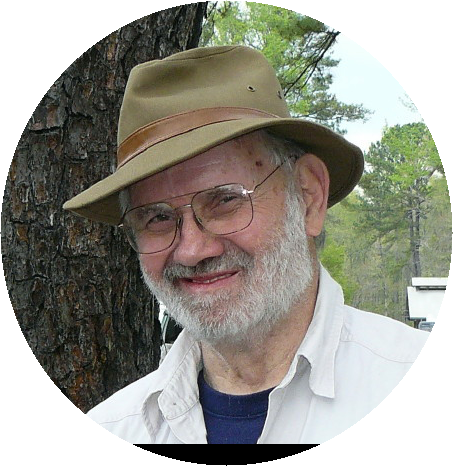 Biographical Info James Batson was born in Steubenville, Ohio in 1936. The Batson family moved to his father's old home place outside Hueytown, Alabama after James attended the first grade in Follensbee, West Virginia. He graduated from Hueytown High in 1954, got his BS in Aeronautical Engineering from Alabama Polytechnic Institute in 1959. He worked his way through college by participating in the Co-Op program with Redstone Arsenal in Huntsville, AL. ln 1988 he retired from the US Army Missile Command after 33 years of service. During this time, he received a MS from Auburn University and a Ph.D. in Aerospace Engineering from the University of Texas at Austin. James is married to Barbara and between them they have 4 children and 10 grandchildren. He began putting handles and guards on blades in the late 60's. He began blacksmithing in 1974 and learned to forge blades in 1976. In 1978, he learned to make Damascus. James joined the ABS in 1981, obtained his master smith rating in 1993, and was elected to the ABS board in 1994. A noted Bowie scholar, Dr. Batson is the author of "James Bowie and the Sandbar Fight", published in 1992. He has also participated in a number of symposiums and seminars dealing with Bowie and the Bowie knife. In 1999, he was elected Chairman of the ABS board after serving as treasurer and vice chairman. Since then, he was presented the Alex Bealer Froe by Artist Blacksmith Association of North America and installed into the ABS Hall of Fame in Little Rock. His term as chairman expired in 2003. He is also served on the Board as the ABS Chairman from June 2011 to June 2013.