Biographical Info As an entirely self taught smith Kevin admits that he did things the hard way. Born and raised in the rural farm country of central Michigan, Kevin has lived his entire life in Matherton, a community with a population of less than 120, and that is the way he likes it. But Matherton could have been the far side of the moon as far as bladesmithing is concerned.   As a boy Kevin was fascinated by swords and at the age of eleven, hammered some copper into his first sword in front of a neighbor’s barn, and the experience drove him to spend the next twenty years learning the skills necessary to do it correctly.  At that stage in his career he saw the knives he ground to shape as more of a success, and followed that path until he began forging in 1985, the same year he began selling his work. In 1988, he married his high school sweetheart Karen and bought the home that included the very neighbor’s barn where he hammered that first copper sword, now destined to become his shop known as Matherton Forge.  In 1991 he decided to get serious about bladesmithing when he went full time and also joined the American Bladesmith Society. Within four years he had earned his Master Smith title and began a new direction in his efforts to recapture the essence of the ancient smith in understanding his medium as completely as possible. Soon metallurgy texts and microscopes took their place beside the anvil and forge in his shop, and he began teaching, lecturing and writing in order to share his findings with others.  Today he has taught at all three ABS schools, and countless hammer-ins, on topics ranging from “Intro to Bladesmithing” for beginners to “Blade Metallurgy” for other Master Smith instructors. Today Kevin still lives in tiny Matherton with Karen and their three children while pursuing his passion in the study of swords and daggers around the world and was the first to teach an ABS class specifically on the “Quillon Dagger”.  When not working on a broadsword or rapier he still draws from his life in the backwoods of Michigan with practical working hunters, bowies and camp knives.  But above his other work he has dedicated himself to the dissemination of solid, factual information for the advancement of the craft he loves. 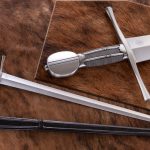 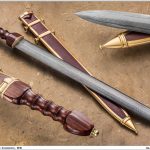 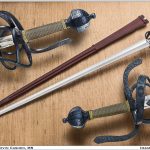 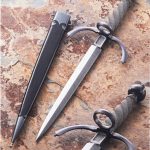 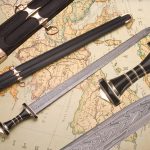 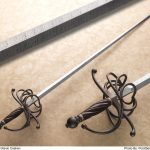 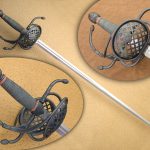